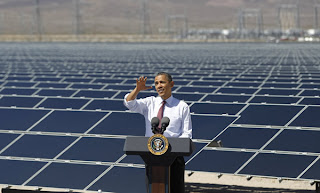 A pair of foreign-owned solar companies that benefited from a combined $84 million in Energy Department tax credits have announced they will lay off employees.
One of the companies, German-owned SolarWorld, was integral in the fight for tariffs against the importation of Chinese photovoltaic solar panels. The other, Chinese company SunTech, blamed those tariffs for its own layoffs.
Both companies benefited from the Energy Department’s stimulus-funded Advanced Energy Manufacturing (48C) Tax Credit. The 48C credit is worth up to 30% of the cost of manufacturing qualifying green energy projects.
SolarWorld received a credit worth $82 million, while SunTech’s was worth $2.1 million.
Both companies announced this week that they will shed some employees. SolarWorld, which announced a 47% revenue decline in the third quarter, blamed a potential 37 layoffs at its Oregon plant on “illegal” Chinese trade practices.
SunTech said the U.S. International Trade Commission’s 35.95% tariff on Chinese solar panels was partially responsible for the 50 impending layoffs at its Arizona production facilities.
While heavy Chinese subsidies do reduce the cost of solar panels from that country, Heritage’s Derek Scissors warned against replicating those policies in testimonybefore the Senate Energy and Natural Resources Committee in June.
“The U.S. boasts a far better energy and environmental record than China,” Scissors explained, “and moving in China’s direction would be very risky.”
SunTech and SolarWorld are the latest additions to a long list of taxpayer-backed green energy companies that have gone bankrupt, laid off workers, or otherwise hit dire financial straits.
Via: The Foundry
Continue Reading...
at 11/17/2012 03:29:00 PM