President Barack Obama is "out of touch" because he does not take seriously the jobs that would be created through the proposed Keystone XL pipeline project, South Carolina Republican Sen. Tim Scott said Saturday.

“The President is so out of touch with unemployed Americans that he thinks tens of thousands of Keystone XL construction jobs are a ‘blip,’ and ‘not a jobs plan,’" the senator said in Saturday's GOP address, in which he slammed Obama's strategy for energy production.

"Opening access to responsible energy production will lower prices, create jobs, grow our economy, decrease dangerous dependence on foreign oil and lower the deficit by adding much needed revenue to the Treasury," Scott, a member of the Senate Energy and Natural Resources Committee, said.
But Obama is blocking efforts being made through his committee, Scott said, and the EPA is also hindering opportunity.

“Meanwhile, the new head of the EPA [Gina McCarthy] said she doesn’t want to talk about jobs anymore as she writes new job killing regulations that will put tens of thousands of Americans out of work," Scott said. “That’s not leadership."

Instead, Scott said, Obama's "failed leadership" on the nation's energy policy will cost all Americans more "when you buy food at the grocery store, take a family vacation, or turn your air conditioner on this summer."

But the government is wasting billions of taxpayer dollars trying to pick through the energy strategy, Scott said, and "this mindset disproportionately affects lower-income Americans, as energy costs consume a quarter of after-tax income for families making $30,000 or less."

Bloomberg Soda ban ruling: Not the win we’d hoped for

I celebrated the July 30 ruling against the Mayor’s soda ban. But I limited the number of 16-plus ounce drinks that I popped in celebration. Not for health reasons, but because the win wasn’t really the libertarian victory I was looking for. The actual win leaves the door open for future soda bans in New York and other cities.
Mayor Bloomberg’s anti-soda crusade officially began on September 13, 2012 when the city’s unelected Board of Health

adopted amendment §81.53. The amendment, titled “Maximum Beverage Size,” prohibited many city stores, movie theaters, and restaurants from selling sodas larger than 16 ounces in size. The reason? Mayor Bloomberg decided New Yorkers were too fat, and soda would suffer the consequences.
A whole host of groups affected by the ruling – including the New York Statewide Coalition of Hispanic Chambers of Commerce, The New York Korean-American Grocers Associate, and the National Restaurant Association – filed suit one month after the Board of Health enacted the ban. The New York

trial court ruled against the soda ban on March 11, 2013. Bloomberg and company appealed.
Via: The Daily Caller

After fighting anti-fracking forces in the state of New York for years, Chesapeake Energy has decided to walk away from its natural gas drilling leases and go elsewhere.

Since 2008, the state of New York has imposed a moratorium on hydraulic fracturing—known more commonly as “fracking.” Groups like New Yorkers Against Fracking have kept the pressure on, hosting star-studded concert rallies featuring actors Mark Ruffalo and Melissa Leo, as well as Natalie Merchant, John Sebastian, Joan Osborne, and others.

The ban and anti-fracking advocacy, combined with a costly legal battle to renew natural gas drilling leases  under their original, more favorable terms, prompted Chesapeake to give up its fight and leave New Yorkers out of jobs and without economic growth “while neighboring states like Pennsylvania, Ohio and West Virginia experience an energy drilling renaissance,” says Reuters.
Kevin Colosimo, a trustee at large for the Energy and Mineral Law Foundation, says citizens in the neighboring state of Pennsylvania are reaping big rewards from the natural gas boom.
“Almost a quarter-million people in Pennsylvania work to produce natural gas from the Marcellus Shale or in related industries… The average salary in core fracking industries is more than $90,000 a year,” writes Colosimo. “In 2010 alone, oil and gas development utilizing fracking contributed more than $11 billion to Pennsylvania’s economy.”
Experts say the earliest New York might lift its ban on fracking would be in 2014.
Via: Breitbart
Continue Reading....
at 8/10/2013 01:29:00 PM No comments:

Food-Stamp Use Rises; Some 15% Get Benefits Food-stamp use rose 2.4% in the U.S. in May from a year earlier, with more than 15% of the U.S. population receiving benefits. (See an interactive map with data on use since 1990.)
One of the federal government’s biggest social welfare programs, which expanded when the economy convulsed, isn’t shrinking back alongside the recovery.
Food stamp rolls were up 0.2% from the prior month, the U.S. Department of Agriculture reported in data that aren’t adjusted for seasonal variations. Though annual growth continues, the pace has slowed since the depths of the recession.
The number of recipients in the food stamp program, formally known as theSupplemental Nutrition Assistance Program (SNAP), is at 47.6 million, or nearly one in six Americans.
Illinois and Wyoming registered double-digit year-over-year jumps in use, while Alaska, Arizona, Idaho, Maine, Michigan, Missouri, New Hampshire, North Dakota, Oregon, Pennsylvania, Utah and Washington state all posted annual drops.
Mississippi was the state with the largest share of its population relying on food stamps — 22% — though Washington, DC was a bit higher overall at 23%. One in five residents in Oregon, New Mexico, Louisiana, Tennessee, Georgia and Kentucky also were food-stamp recipients. Wyoming had the smallest share of its population on food stamps — 7%.
Via: WSJ
Continue Reading....
at 8/10/2013 01:21:00 PM No comments: Small business owners across the country are receiving letters from the IRS questioning if they are reporting all of their cash income, in a new push by the agency some are saying could unnecessarily create fear in the small business community.

is an attempt to respond to what the agency feels is a widespread failure by small businesses to report all their cash sales. 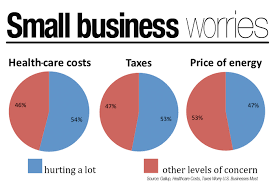 The agency says the letters are not the same as an audit, and it is simply seeking more tax information from the businesses. However, some lawmakers and business owners who received the letters say the initiative is alarming.
"There's an emotional thing when you get a pretty ominous-looking letter from the IRS, [saying] you might have done some bad things," small business owner Tom Reese tells the Wall Street Journal. "I really work hard with my accountant to make sure that I not only follow the law, but follow the letter of the law."

One letter the IRS sent is headlined, "Notification of Possible Income Underreporting."  It notifies the business owner "your gross receipts may be underreported" and says they must complete a form "to explain why the portion of your gross receipts from non-card payments appears unusually low."

One lawmaker says the letter’s tone implies wrongdoing from the start.

In just about seven weeks, people will be able to start buying Obamacare-approved insurance plans through the new health care exchanges.
But already, Senate Majority Leader Harry Reid is predicting those plans, and the whole system of distributing them, will eventually be moot.
Reid said he thinks the country has to “work our way past” insurance-based health care during a Friday night appearance on Vegas PBS’ program “Nevada Week in Review.”
“What we’ve done with Obamacare is have a step in the right direction, but we’re far from having something that’s going to work forever,” Reid said.
When then asked by panelist Steve Sebelius whether he meant ultimately the country would have to have a health care system that abandoned insurance as the means of accessing it, Reid said: “Yes, yes. Absolutely, yes.”
The idea of introducing a single-payer national health care system to the United States, or even just a public option, sent lawmakers into a tizzy back in 2009, when Reid was negotiating the health care bill.
“We had a real good run at the public option … don’t think we didn’t have a tremendous number of people who wanted a single-payer system,” Reid said on the PBS program, recalling how then-Sen. Joe Lieberman’s opposition to the idea of a public option made them abandon the notion and start from scratch.
Eventually, Reid decided the public option was unworkable.
Via: Las Vegas Sun
Continue Reading...
at 8/10/2013 12:28:00 PM No comments:

John Boehner passed an immigration reform bill similar to the Gang of Eight’s, it would be one of the “final things he did as speaker.”
Paul offered an update on Congress’ immigration reform efforts: Earlier this summer, the Democratic-controlled U.S. Senate passed its version of immigration reform legislation. Despite that, Paul still lobbied for his amendment that would put Congress in charge of making sure the border is secure

.
“I’m not hearing much,” Paul said. “It’s gone pretty quiet on it. And I still think they’re still working on something in the House and the conservative members that have come up to me — what I keep saying and what I come back to is my amendment is trust

but verify and in my amendment, I say you have to have congressional votes each year for about five years and each time we have to vote to say the border is more secure.”


Host Laura Ingraham was skeptical of Paul’s position, noting that Congress may be in hands of Democrats who would like to see a weakened border for their own political gain. Paul said that would still be better than a president with sole discretion.
Via: The Daily Caller
Continue Reading...

A 47-STORY HIGH-RISE HAS A TALL PROBLEM: THEY FORGOT THE ELEVATORS

At 47 stories, the In Tempo skyscraper in Spain is set to be the tallest residential building in the European Union.
But anyone living on floors 21 through 47 has a problem: to get any higher than the 20th floor, you have to take the stairs.

The In Tempo skyscraper in Spain was built without any elevators to the top floors. (Image: YouTube)
Builders are likely more than a little red-faced after discovering that the 650-foot luxury high-rise under construction in the resort city of Benidorm is missing a crucial element — an elevator that goes all the way to the top of the building. Imagine the difficulty you would have trying to move into your apartment on any floor between 21 and 47.
The In Tempo was originally designed as a pair of 20-story residential towers, but was later upgraded to add the extra 27 floors. The project was supposed to be completed and opened by 2009. Behind schedule and in a rush to move the project along, someone (or a lot of someones) neglected to design and allocate space for elevators and the machinery needed to operate them.According to Gizmodo, the architects on the project resigned after the embarrassing error was discovered.
The twin tower complex is certainly an interesting design. This video spotted on YouTube shows some of the In Tempo Towers aggressive style that includes a bridge and multi-story pavilion between the towers.
Via: The Blaze
Continue Reading....
at 8/10/2013 12:01:00 AM No comments: