“Time and again, Hillary Clinton’s dishonesty and cronyism have proved she is the wrong person to lead our country as president. The American people have had enough of the corruption, the deceit, and the stonewalling which have been the hallmarks of her entire career. After decades of lying to the public, politically-motivated flip flops, a family foundation that took millions from foreign governments while she was Secretary of State, and repeated and blatant lies over her reckless mishandling of classified information, the only sure thing about Hillary Clinton is that she puts her own political interests above the rest of us.  Tonight’s speech was merely a litany of platitudes which dodged a serious discussion of our slumping economy and our diminished standing in the world under President Obama, topics which should be well-known to her after spending years in his cabinet. Hillary Clinton is the ultimate Washington insider at a time when Americans are eager to break with eight years of a Democrat status quo, and there’s no doubt her longtime pattern of shady conduct and double standards will continue if she is elected president.
“Americans can no longer afford a system which takes care of the well-connected at the expense of everyone else, and a Clinton presidency only means a third term of President Obama’s failed policies, just with more corruption and secrecy. Now is the time to break from a left-wing agenda which has shrank paychecks, left America more ripe for terrorist attacks, and reduced our freedoms. With Donald Trump and Mike Pence, Americans can look forward to being prosperous at home, respected abroad, and having their voices heard once again.”
Via: GOP.com
Continue Reading.....
at 7/29/2016 02:25:00 PM No comments: 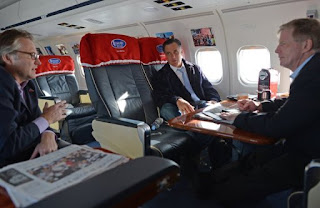 Yet another poll has shown the presidential race in Ohio tied, with President Barack Obama dropping below the crucial 50 percent mark. The latest Akron Beacon Journal/Ohio Newspaper Organization poll shows the race in a 49%-49% tie, with Republican Mitt Romney erasing the 51%-46% lead Obama enjoyed as of late September.

The poll, with a D+3 sample, also showed Romney leading 51%-46% on the issue of the economy. Obama held a slight lead among independent voters, albeit with a very large margin of error, given the small number of uncommitted voters remaining. Obama has retained his double-digit margin among women, while Romney has opened a double-digit lead among Ohio men, according to the poll.
Both campaigns are attempting to spin recent Ohio poll numbers in their favor, with the Obama campaign insisting that it is holding onto a narrow lead. Republican National Committee chair Reince Priebus told CNN's Candy Crowley on Sunday's State of the Union program that the race is tied, and that a tie "goes to the challenger."
The campaigns have also dueled over early voting numbers in Ohio and elsewhere. The Obama campaign claims a large lead among those who are voting early, but the Romney campaign insists that margin is among a very small proportion of voters, and that the gap between Democrats and Republicans in early and absentee voting has narrowed significantly since 2008.
Via: Breitbart
Continue Reading...
at 10/28/2012 11:49:00 AM No comments:

Ron Paul delegates: ‘We were robbed!’ 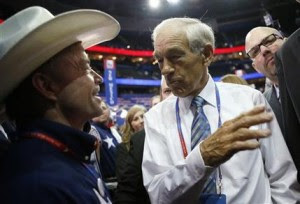 TAMPA, Fla. — Republican leaders averted a floor fight at the Republican National Convention in Tampa, Fla., on Tuesday, but not without boos, yelling, bruised feelings and allegations of cheating.
Before the state-by-state convention vote for the GOP’s presidential candidate, Ron Paul supporters lost a voice vote to seat more of their delegates from Maine.
“We were robbed!” a backer of the Texas congressman shouted in response. Paul delegates began chanting “seat them now!” The majority behind Mitt Romney tried to drown them out with chants of “USA! USA!”
Republican National Committee Chairman Reince Priebus had to intervene and gavel the convention back to order.
Former New Hampshire Gov. John Sununu then presided over a voice vote on even more controversial RNC rule changes. The modified rules were intended to shorten the primary process and, critics charge, strengthen national party leaders at the expense of state and local Republicans.
Ron Paul supporters were the most vocal in their objections, as is their custom, but a broader cross-section of conservatives opposed the rule change. Longtime GOP national committeeman Morton Blackwell wrote in a letter to delegates that they “would amount to a power grab by Washington, D.C. party insiders and consultants designed to silence the voice of state party activists and Republican grassroots.”
A chief complaint was that the rules changes would advantage early front-runners like Romney over conservative challengers, including not only Paul but runner-up Rick Santorum and tea party favorite Michele Bachmann.
Via: The Daily Caller
Continue Reading...
at 8/28/2012 08:21:00 PM No comments: