Barack and Hillary accuse The Donald of Being Them!

‘The Totalitarian State of Not Being Able to Be’ is upon us.  Read their lips if you’ve got the stomach to do so: Barack and Hillary not only love America, it’s the Love Affair of the Century.
An identity theft started by President Barack Obama was completed by Hillary Clinton at her last night nomination acceptance speech.

Donald J. Trump, the populist folk hero millions want to see in the Oval Office, has had his identity stolen by Barack and Hillary.  Just like Islamic terrorism, he was only a figment of our imagination.
The Totalitarian State of Not Being Able to Be’ is now the lay, if not the law, of the land.
Here’s how it looked before becoming official:
Well hidden under progressive policies disguised as “Good for all”, it’s not yet as glaringly recognizable as all those totalitarian states that came before, but it’s making speedy headway toward a civil society where freedom and liberty will be filed away in the Distant Memories Folder.

In case you haven’t yet noticed, you are no longer permitted to be a patriot without being identified as a Xenophobe.
You are deemed as “unreasonable” for wanting protection for your children in public school washrooms without being categorized as a bigoted anti-LGBTQ revolutionary.
You are not permitted to be leery about ‘refugees’ flooding your town or city without being labeled an Islamophobe.  Acting like the latter will get you thrown off Facebook and Twitter, and the day is not far off when it will come with a prison term.
Via Canada Free Press
Continue Reading.....
at 7/29/2016 02:14:00 PM No comments:

The 'War on Women' Backfires 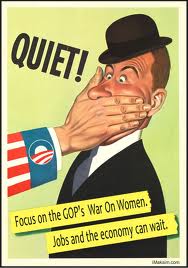 One of the intriguing aspects of this election is how the Democrats' shameless and clueless appeal to women is ending with the vaporization of the historic "gender gap" among voters.

The Lady Parts Convention
From the prancing Code Pink vulvas outside the convention venue to the choice of speakers, there was no doubt that the Democrat Convention was aimed at securing the women's vote. Indeed, Balkanizing women and minority voters was then as significant a part of the Obama strategy as securing the electoral votes of Ohio is now to them.


The thinking here apparently was that by highlighting a thirty-year-old law student whining that others should pay her contraceptive costs, emphasizing an unfettered right to abortion, and equal pay for equal work (a convenient code for further feathering trial lawyers nests with dubious claims for parity) and highlighting fluffy issues beloved of the ill-informed, Obama would lock up the women's votes. The Republican "War on Women" was the theme of a convention designed around obscuring the fact that the Democratic standard-bearer had no record to run on, no plan for a second term, and shared the ticket with a crazy person afflicted with logorrhea.

Reality Bites
This week, as Susan Fields observes, it is clear that strategy failed so badly that the long running gap between male and female voters has been practically erased.
The Gallup Poll now shows Mitt Romney trailing the president by only a point among women who are likely to vote in 12 swing states. This follows a Pew Research Center poll taken after the first presidential debate showing that President Obama's 18-point lead among women had shrunk to a tie, 47 percent to 47 percent.
"In every poll, we've seen a major surge among women in favorability for Romney," Democratic pollster Celinda Lake told USA Today after the first debate. These polls find women increasingly concerned with the deficit and debt, just like men. The social issues continue to be more important to women than to men, but these issues no longer dominate the discussion. [snip] In the second debate, Romney looked deeper into the dark side of Obama accounting, finding that 3.5 million more women are living in poverty than before he took charge of the economy. Women understand that an economy with 7.8 percent unemployment, when half of college graduates can't find good jobs, is not good for anyone.
I don't disagree with Fields' assessment that the terrible Obama economy and its effect on women have a lot to do with the shift, but I suggest that there's a great deal more to it.
Bad times tend to focus the mind and wise up all voters, including women. Maybe we really aren't voting for the head of a national PTA, Johnny Appleseed, or for our choice of "American Idol." Perhaps it would be a good idea to elect someone who does understand economics and business.