File - In this Sept. 1, 2015 file photo, from left, Brad Steinle, Liz Sullivan and Jim Steinle, the brother, mother and father of Kate Steinle who was shot to death on a pier, listen to their attorneys speak during a news conference on the steps of City Hall in San Francisco. The parents of a woman killed on a San Francisco pier by a man in the country illegally is suing the city and two federal agencies that they say contributed to her death. Kate Steinle's parents filed the wrongful-death lawsuit Friday, May 27, 2016. It accuses the San Francisco Sheriff's Department of failing to notify federal immigration officials that it was releasing Juan Francisco Lopez-Sanchez from jail. (AP Photo/Eric Risberg, File)

President Obama's Justice Department has coughed up hundreds of millions of dollars to so-called "sanctuary cities" that refuse federal demands for criminal illegal immigrants sought for deportation, according to a new inspector general memo.
In just 10 of 155 jurisdictions reviewed, taxpayers handed over $342.1 million in Justice grants to the law-breaking cities and states that have policies barring jails and police from cooperating with the U.S. Immigration and Customs Enforcement agency. The IG said that is 63 percent of the funds available to all American cities.
The memo is likely to stir up the issue of illegal immigration and sanctuary cities in the presidential campaign.


Democrat Hillary Rodham Clinton has voiced support for the sanctuary effort in which state and local officials in mostly urban areas choose to harbor illegals with criminal records rather than comply with ICE requests to turn them over or even identify their immigration status. Donald Trump has called for an end to the practice.
Via: Washington Examiner
Continue Reading.....
at 7/29/2016 04:04:00 PM No comments:

Hillary Clinton Cracks Down On For-Profit Colleges After Cashing In

When Hillary Rodham Clinton, the 2016 presidential candidate, unveiled her college affordability plan on Monday, she sounded every bit the critic of for-profit universities. But Mrs. Clinton, the spouse, benefited to the tune of millions of dollars from that same industry in a business relationship her husband enjoyed as recently as this spring.
Former President Bill Clinton collected more than $16 million from 2010 to 2014 as honorary chancellor of Laureate Education, a for-profit company that runs 80 education institutions around the globe, according to recently released tax returns. Four of its six U.S. colleges were flagged on the Education Department’s list of schools whose access to federal financial aid was being monitored out of concern over financial irresponsibility.
The Clinton Foundation also lists Laureate International Universities as one of its donors, giving $1 million to $5 million during the first half of this year. Mr. Clinton praised the company when he stepped down in late April, less than two weeks after his wife officially entered the presidential race.
Over the years, Mrs. Clinton collected political donations from Laureate’s CEO, Douglas Becker, including a $2,000 donation in 2005 to her Senate re-election campaign and $2,300 in 2007 to her first presidential campaign, Federal Election Commission records show.
On Monday, Mrs. Clinton said if elected president she would get tough on federal aid that flows to those kinds of for-profit institutions, strengthening the “gainful employer rules” that requires schools to adequately prepare students for the workforce.
“There are students who take out loans to pay for an expensive degree from a for-profit institution — only to find little support once they actually enroll, or they graduate and discover that, when it comes to finding a job, their degree isn’t worth what they thought,” Mrs. Clintonsaid in a message posted on Medium.com.
Her plan also would direct law enforcement agencies to crack down on for-profits that engage in deceptive marketing, fraud, and other illegal practices.
The for-profit crackdown is part of a much broader $350 billion proposal to make college more affordable by having the federal government pick up costs, chiefly by offering taxpayer money to states to keep their public schools’ costs lower.
She proposed $175 billion over a decade in grants to states that keep costs low enough that students wouldn’t need to go into debt to cover tuition at four-year public schools and private nonprofit colleges. States and colleges would be responsible for holding down costs as part of the deal.
More funding would go to 25 million borrowers, helping them refinance their student loans with lower interest rates, and the rest would go to an “innovation fund” to support new models of higher education.
“No family and no student should have to borrow to have to pay tuition at a public college or university,” Mrs. Clinton told reporters. “Everyone who has student debt should be able to refinance it at lower rates. Cost won’t be a barrier, and debt won’t hold you back under my plan.”
Mrs. Clinton plans to pay for her plan by capping the itemized deductions that wealthier families can claim on tax returns.
Via: Washington Times
Continue Reading......
at 8/11/2015 03:30:00 PM No comments:

WASHINGTON (AP) — Hillary Rodham Clinton's standing is falling among Democrats, and voters view her as less decisive and inspiring than when she launched her presidential campaign just three months ago, according to a new Associated Press-GfK poll.
The survey offers a series of warning signs for the leading Democratic candidate. Most troubling, perhaps, for her prospects are questions about her compassion for average Americans, a quality that fueled President Barack Obama's two White House victories.
Just 39 percent of all Americans have a favorable view of Clinton, compared to nearly half who say they have a negative opinion of her. That's an eight-point increase in her unfavorable rating from an AP-GfK poll conducted at the end of April.
The drop in Clinton's numbers extends into the Democratic Party. Seven in 10 Democrats gave Clinton positive marks, an 11-point drop from the April survey. Nearly a quarter of Democrats now say they see Clinton in an unfavorable light.
"I used to like her, but I don't trust her," said Donald Walters of Louisville, Kentucky. "Ever since she's announced her candidacy for the presidency I just haven't liked the way she's handled things. She doesn't answer questions directly."
While Clinton's approval rating fell, Obama's stayed constant at 46 percent since April. More than 8 in 10 Democrats have a positive view of the president.
At least part of Clinton's decline may be due to questions about her character, a topic Republicans have been trying to make central to the 2016 campaign. In ads, stump speeches and online videos, they paint her as a creature of Washington who flouts the rules to get ahead.
While Clinton has spent decades in the public eye, she's focused in recent months on creating a more relatable — and empathetic — image. In public events, she frequently talks about her new granddaughter, Charlotte, and references her early career as a legal advocate for impoverished children.
The survey suggests that voters aren't sold on her reinvention: Only 4 in 10 voters say they view Clinton as "compassionate." Just 3 in 10 said the word "honest" described her either very or somewhat well.
Stephanie Bergholdo, a Democratic voter from Oak Park, California, says she finds Vermont Sen. Bernie Sanders and Massachusetts Sen. Elizabeth Warren far more sincere in their liberal views — though she's likely to vote for Clinton should she become the party's nominee.
"She's piggybacking on some of the things they've been talking about," said Bergholdo. "I don't think she comes across very genuine. She just seems a little stiff to me."
The percentage of respondents calling Clinton at least somewhat inspiring also slipped from 44 percent to 37 percent.
Via: My Way News
Continue Reading...
at 7/16/2015 12:00:00 PM No comments: 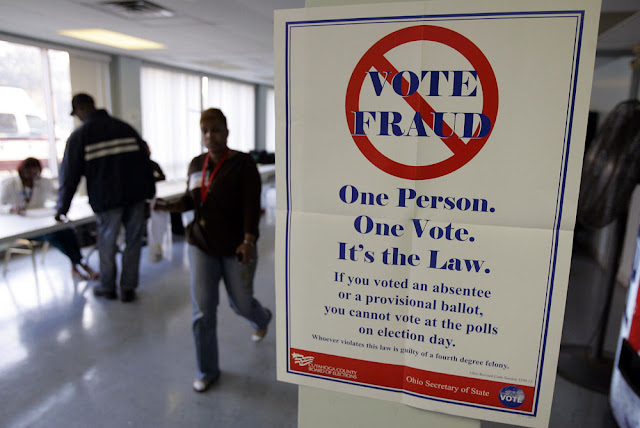 Perhaps to distract attention from her own scandals, Hillary Rodham Clinton charges that Republicans want to curtail young people’s and minorities’ voting rights.  The charge that Republicans engage in vote suppression has been in Democrats’ playbook for years.  (By regurgitating this hoary claim, Mrs. Clinton lends credence to Marco Rubio’s observation that some pols may be antiquated.)


We need to investigate her assertion that GOP concerns about election fraud are overblown.
Given America’s dependence on elections, it is essential to the nation’s well-being that citizens have confidence in elections’ honesty and integrity.  People must be able to assume that candidates and parties declared the winner of an election won honestly.  Vote fraud saps people’s trust and confidence in government itself.
Sadly, the U.S. has a long history of vote fraud.

Unless efforts to thwart fraudulent voting are successful, Americans should expect even more in future elections.  It is conceivable that, unless preventative action occurs, Americans may endure more contested elections that will make the 2000 fiasco in Florida look like an episode of good government.