Democratic federal-level campaigns are paying minority staffers significantly less than their white counterparts, according to a study from the New Organizing Institute (NOI).
“African American staffers on Democratic federal-level campaigns are paid 70 cents on the dollar compared to their white counterparts; Hispanics are paid 68 cents on the dollar,” writes Ethan Roeder, executive director of NOI.
The study finds that although Republican campaign staffs hire a disproportionately high number of white men, the income disparities between racial groups are not nearly as pronounced as on Democratic campaigns.
Barack Obama’s reelection campaign received criticism during the 2012 elections for a picture of his Chicago headquarters that revealed a lack of diversity; it responded by making a push to hire more African Americans.
NOI completed the study by compiling data from the Federal Elections Committee on 16,241 individual campaign staffers from 2012 that they could with good confidence determine the race of.
Via: WFB
Continue Reading....
at 12/19/2013 04:00:00 PM No comments:

Should there be early voting? 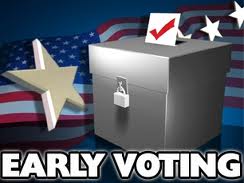 Early voting has begun in the 2012 election and some people, like our friend Matt Lewis, seem to think that’s a bad thing. Being opposed to extended voting opportunities is an idea which immediately sets off alarms for me, but it’s worth a moment to examine it as election day approaches.
Matt’s responding to an NBC News story which proclaims that nearly half the nation is already voting. Of course, that figure seems to include absentee ballots, which are not technically “early voting” since they won’t be recorded until election day. Also, there are plenty of people (especially our troops serving overseas) who have no other access to the ballot, so I would hope people aren’t protesting that.
But Matt is more focused on the places where the polls open days – if not weeks – in advance and in person voting is taking place. Follow the link for the full explanation of each, but here are the five points he’s making.

1. It doesn’t work2. Voters are casting ballots before they have all the information3. The cost — both to the taxpayer and the campaigns4. Ballot integrity5. Community

Item number one isn’t even worth a lengthy debate, in my opinion. The study in question relies on torturing the data with so many vague and glossy “variables” to arrive at a number – rather than just counting the number of votes cast – that it becomes a very murky soup. And the basic premise – that having more days with the ballots open somehow hinders voters – is counterintuitive on its face. They do make a point about it being “harder for the campaigns” to organize their get out the vote strategy, but that’s the problem of the campaigns, not the voters.
A part of me wants to sympathize with Matt on item number two, but this still comes down to a matter of personal responsibility. Something can always happen later. When do you get in on buying a new stock? On the first day or after it’s had time to ripen? Plus, these elections last so long now that you’ve doubtless got all the information you’re looking for prior to the final fifteen seconds before midnight on Monday. You pick when to vote and you live with your choice.
As to number four, ballot integrity, I have to scoff. Matt argues that most early voting is done by mail, “opening the door” to mischief of various sorts. Oregon and Washington vote exclusively by mail and somehow the specter of angry spouses throwing out votes has failed to materialize.
Via: Hot Air
Continue Reading...
at 9/23/2012 01:00:00 AM No comments: Links to this post