COLORADO SPRINGS — Donald Trump began his speech here Friday afternoon playing his greatest hits, hammering  “Crooked Hillary Clinton” and bashing the media during an appearance at the University of Colorado at Colorado Springs.
VIDEO
The morning after Clinton accepted the Democratic nomination, Trump called her speech “average,” and said he had better TV ratings.
“After watching that performance last night, such lies, I don’t have to be so nice anymore,” Trump said to thunderous applause. “I’m taking the gloves off. Trump is gonna be ‘No more Mr. Nice Guy.”
He added, “If Hillary gets in, it’ll be four more years of Obama, and nobody wants that.”
Trump said Clinton was not classy for not congratulating Trump during her speech Thursday night.
“We’re going to get a lot of Bernie (Sanders) supporters, I think,” Trump said, adding “Bernie sold his soul to the Devil,” for endorsing Clinton.
And Trump promised multiple visits to Colorado, a state he said he thinks he can win.
“There’s no reason we shouldn’t win Colorado. These are great people. Heavy military presence, respect fof their police. Law and order, that’s me,” he said.
Via: The Denver Post
Continue Reading.....
at 7/29/2016 03:33:00 PM No comments: WASHINGTON –  Two Republicans were sworn in Thursday to replace the Colorado Senate Democrats they defeated in historic recalls over new gun restrictions.
Former Colorado Springs Councilman Bernie Herpin and retired Pueblo police officer George Rivera took the oath of office in front of a Senate packed with Republican lawmakers and other supporters in the gallery. They were greeted with loud cheers and applause.
Herpin said in his opening speech that he would "never forget the lesson of this summer."
"We serve at the pleasure of those we represent," he said.
The recalls last month marked the first time in state history legislators were ousted from office and reflected the continued debate over what gun restrictions, if any, are needed.
The wins boost the GOP's power in the Senate, narrowing the Democrats advantage in the chamber to an 18-17 margin. Democrats control the House 37-18.
Via: Fox Political News
Continue Reading....

Jon Caldara, the president of the Independence Institute, is the target of a criminal complaint submitted to the Colorado attorney general’s office.
Caldara made headlines by switching his voter registration from Boulder to Colorado Springs — roughly 100 miles away — so that he could “vote” in the Sept. 10 recall election. He cast a blank ballot.
But his larger point was to show that a new Democratic-sponsored election reform law that allowed him to do so was ripe for abuse. It allows people to register as late as Election Day and to affirm that they intend to make the district their permanent home, even if they “moved” to the district that day.
Caldara and others have pointed out that such a promise is impossible to enforce. Shortly before the election, he rented a room in a friend’s house in Colorado Springs, told elections officials that he planned to make it his permanent home and was allowed to cast a ballot.
“I’ll see what the town is like,” Caldara told reporters when he voted. “I’ve heard great things about it. I’m looking forward to checking out Colorado Springs.”
Later, however, he changed his mind and decided to continue living in Boulder, according to The Colorado Independent. The website reported that recent floods convinced him to keep his Boulder residence in order to be close to his children.
“Not only did I intend to move to Colorado Springs, I did move to Colorado Springs,” he’s quoted as saying in a statement responding to the article.
At least one person doubts his sincerity — John Morse’s campaign manager, Christy Le Lait, who filed a complaint with the local district attorney, who forwarded it to the Colorado Attorney General John Suthers.
Via: Daily Caller 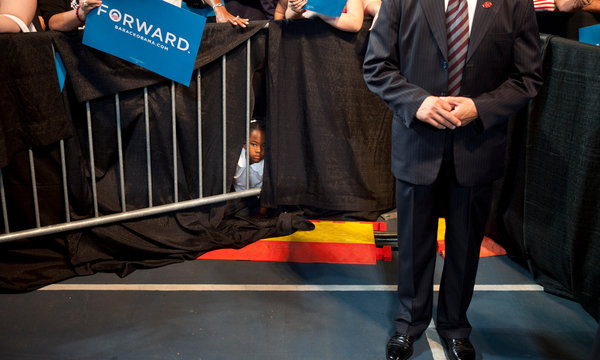 COLORADO SPRINGS — About 4,200 people of all ages and colors spread across a green at Colorado College on Thursday in this conservative city for a rally with President Obama. Hours earlier, 3,500 supporters did the same in smaller Pueblo, Colo.

Together with two events on Wednesday in Denver and Grand Junction, Colo., an estimated 14,100 people in this battleground state turned out over the past two days to cheer Mr. Obama.
Good crowds, especially compared with the hundreds that typically turn out to see Mitt Romney. But four years ago Mr. Obama often was drawing five-digit throngs, filling arenas’ nosebleed seats and overflow rooms and regularly requiring shutdown orders from the local fire marshals.
Which raises a couple of questions: Where are the crowds now? And what does it mean for the results in November?
“We have plenty of time for big rallies,” a campaign spokeswoman, Jen Psaki, said between the rallies on Thursday. “Our focus right now is on exciting our supporters and winning over undecided voters and the smaller and medium-size events are the best venue to accomplish that because the president can closely engage with the crowd.”
Big rallies are expensive, especially given the logistical and security challenges for a president as opposed to a mere United States senator. And Obama campaign operatives, both at the Chicago headquarters and in swing states where Mr. Obama recently has stumped, say the campaign intentionally limits crowds by restricting tickets. The reason is to allow the president to better connect with supporters, aides say.
Pettie Quintana, an employee at the Holiday Inn Express in Pueblo, said on Thursday that she had gone earlier in the week to the state fairgrounds to get a ticket, but the ticket office was closed, its allotment gone.
Via: NYT
Continue Reading...