Schumer: Jobless Benefits ‘The Best Stimulus There Is’

(CNSNews.com) – Sen. Chuck Schumer (D-N.Y.) said that extending long-term unemployment benefits would be the “best stimulus there is” for the economy, saying it would create the most jobs for the money.
“At the end of last year, there were 5 million people receiving emergency UI [unemployment insurance]. This year, there are only 2 million. It’s working,” Schumer said at a press conference Thursday.
“We’re all talking about a stimulus. How do we get the economy moving? This is the best stimulus there is.”
Schumer and fellow Senate Democrats called for yet another extension of benefits for the long-term unemployed before the current benefit extension expires at the end of the year.
Recently, the Congressional Budget Office estimated that a full-year extension of the benefits would cost $30 billion and create approximately 300,000 full-time equivalent jobs.
CBO’s estimate is not saying that extending benefits will create 300,000 new positions or that 300,000 additional people will be hired, but that the demand created when the unemployed spend their benefit checks will in turn pay for enough work-hours to equal 300,000 full time jobs. The actual job creation figures could be far lower.
Via: CNS News
Continue Reading...
at 12/06/2012 07:24:00 PM No comments:

As soon as ex-General Electric CEO Jack Welch fired off a tweet questioning today's just released "unbelievable jobs numbers," the media went into a frenzy talking about how "conservatives" were launching conspiracy theories. Well, that's handy for the media and the Obama campaign, but it's not just "conservatives" who are confused by a full 0.3% drop in unemployment when only 114k jobs were created.

CNBC is as confused as the rest of us:
Job growth remained tame in September, with the economy creating just 114,000 net new positions though the unemployment rate fell to 7.8 percent, the first time it has been below 8 percent in 43 months.
The report presented a slew of contradictory data points, with the total employment level soaring despite the low net number.
The falling jobless rate had been a function as much of the continued shrinking in the labor force as it was an increase in new positions.
On the air, CNBC seemed equally perplexed by the biggest one-time drop in the unemployment rate in 29 years!
ABC News' Chris Cuomo is also skeptical of the numbers:
--

Chris Cuomo @ChrisCuomo
#unemployment is at 7.8% in September. Except it really wasn't. It is much higher, w/ underemplyd and those who stopped looking.#notfixed 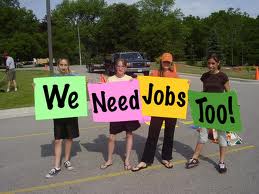 The unemployment rate for 16 to 19 year olds was an astonishingly high 23.8 percent last month. The United States is facing a youth employment crisis.


Young workers are finding it increasingly difficult to enter the labor market, get their first job and work their way up the career ladder. Yet, during this time of persistently high youth unemployment, there have been calls to increase the minimum wage from $7.25 to as high as $10 per hour.
America's youth are having a hard time reaching the first rung on their career ladders. Now is a bad time to increase minimum wages and make that important step more difficult.
Higher minimum wages generate a tradeoff between higher wages for the employed and higher rates of unemployment. When minimum wages increase, many workers who earn less than the new higher minimum wage lose their jobs. Firms often decide that they can get by with fewer workers instead of paying higher wages.
As one might expect, David Neumark of the University of California's Irvinecampus and William Wascher of the Federal Reserve Board survey recent research on minimum wages and find that the least-skilled workers are hurt the most by minimum wages.
Minimum wages are particularly damaging for the future prospects of young workers as they typically earn the low wages that are impacted by the change in the minimum wage law.
In 2010, 50 percent of workers aged 25 and below, and 78 percent of teenagers earned less than $10 per hour. With youth unemployment topping 20 percent, it has become clear that employers are not willing to hire young workers at the current minimum wage, much less at an even higher one. It would damage the prospects of those willing but no longer able to work for wages below the minimum wage.
So in the short term, higher minimum wages make it difficult for young workers to find jobs. In the long term, higher minimum wages diminish the career prospects of young workers. Higher rates of unemployment mean that young workers do not have access to the resume-building activities associated with employment and do not gain the experience necessary to earn higher wages in the future.
Via: AEI
Continue Reading...
at 9/29/2012 08:24:00 AM No comments: