Leader Reid rules out Senate vote on 'Plan B' 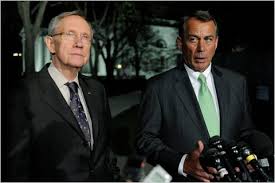 Senate Majority Leader Harry Reid (D-Nev.) said Thursday the Senate will not vote on Speaker John Boehner’s (R-Ohio) "Plan B" to extend tax rates for family income below $1 million.
The Democratic leader blasted Boehner for wasting time on "fiscal cliff" legislation that will not see floor time in the upper chamber.

“We are not taking up any of the things that they’re working on over there now,” Reid told reporters. “It’s very, very, very unfortunate the Republicans have wasted an entire week on a number of pointless political stunts.”

“The bill has no future, if they don’t know it now, tell them what I said,” he added.
Reid said Boehner should schedule a House vote on the Senate-passed bill to extend the Bush-era tax rates for family income below $250,000.
“The Senate bill is the only one that will be signed into law. We could protect middle-class families tomorrow,” Reid said. “The Speaker refuses to bring our bill to the floor because it would pass.”
Republicans argue the Senate-passed bill is not a solution to the stalemate because it would allow tax rates on inheritances and dividend income to rise dramatically.
Democratic leaders say the GOP plan will not see the light of day in the upper chamber because it raises taxes on middle-class families, does not extend the college tuition tax credit, the earned income tax credit or the child tax credit and includes an “unrealistic proposal” for the estate tax.
Boehner’s plan would keep the top estate tax rate at 35 percent. It is scheduled to rise to 55 percent without congressional action.
Via: The Hill
Continue Reading...
at 12/20/2012 01:13:00 PM No comments: