Scott Walker and the Fate of the Union 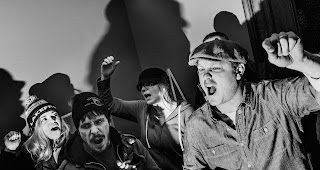 In Wisconsin, where the labor movement took root a century ago, a campaign by the governor has broken its power. His political allies hope he can take a similar campaign nationwide.

On his first day of work in three months, Randy Bryce asked his foreman for the next day off. He wanted to go to the Capitol in Madison, Wis., and testify against a proposed law. Bryce, a member of Milwaukee Ironworkers Local 8, was unloading truckloads of steel beams to build a warehouse near Kenosha, and he needed the job. He has an 8-year-old son, his debts were piling up and a 10-hour shift paid more than $300. But the legislation, which Republicans were rushing through the State Senate, angered him enough to sacrifice the hours. Supporters called it a “right to work” bill, because it prohibited unions from requiring employees to pay dues. But to Bryce, that appealing name hid the true purpose of the bill, which was to destroy unions.
The next morning, Bryce, who is 50 and has close-­cropped black hair and a horseshoe mustache, woke up at 5:30, got dressed in his usual jeans, hoodie and Local 8 varsity jacket with an I-beam and an American flag stitched on the back and drove 90 miles to Madison in his gray Mustang. Despite the February chill, crowds had begun to gather in the square outside the Capitol. The scene was reminiscent of a similar one that played out four years earlier, in 2011, when thousands of people occupied the Capitol’s rotunda for more than two weeks to protest Act 10, a law that demolished collective-­bargaining rights for nearly all public employees. The protests in Madison were the first significant resistance to the ascendant Tea Party and helped set the stage for Occupy Wall Street. For Wisconsin’s governor, Scott Walker, it was the moment that started his conservative ascent. “The Republican Party has a demonstrated, genuine hero and potential star in its ranks, and he is the governor of Wisconsin,”Rush Limbaugh said last year. The unions, Democrats and other perceived enemies, he continued, had “thrown everything they’ve got at Scott Walker, and he has beat them back without one syllable of complaint, without one ounce of whining. All he has done is win.” Walker is expected to announce in the next few weeks that he is entering the 2016 presidential race.
Via: NYT
Continue Reading....
at 6/12/2015 08:30:00 PM