Thank God. I think Trump can handle losing the election, but losing a ratings battle to a dial tone like Hillary Clinton might have broken the guy. He’ll be okay now.
The downside: He’ll be mentioning his ratings win not just every day until Election Day but likely every day for the rest of his life.

These are the early numbers. The final figures later today will be slightly better, but probably not enough to erase Trump’s advantage. All three previous nights of the Democratic convention outdrew their Republican counterparts, by the way, and Hillary outdrew Trump last night on CNN and MSNBC. Trump’s margin of ratings victory comes entirely from Fox News, which blew the roof off last Thursday for his speech with 9.3 million viewers but clocked just three million yesterday for Clinton. Did Fox get a big jump for Trump because right-wingers who were already voting for him decided to tune into their favorite network to watch his speech? Or was it a more politically mixed audience that gravitated to Fox last week on the assumption that the Republican news channel is naturally the place to watch the Republican nominee speak? The answer to that question would give us a clue about Trump’s crossover appeal in November.
Obama’s 2012 speech outdrew both Trump and Clinton, but if you missed last week’s postabout convention ratings over time, read that for all of the caveats about shrinking ratings in an age with multifarious media options. Given Trump’s celebrity and the curiosity factor surrounding him, it’s arguably no surprise that he’d draw more of an audience than a ho-hum Democratic nominee. But Hillary’s no ordinary nominee: She’s the first woman major-party nominee in history. The fact that she couldn’t bring out enough viewers to top him despite having a historic storyline to help boost interest is a comment on how “meh” she is to the public. Apart from her husband she’s the biggest known quantity in American politics, the ultimate rerun. And like I said in last night’s convention thread, who wants to watch a rerun when there’s so much else on TV — even when that rerun is a Very Special Episode?
Via: Hot Air
Continue Reading.....
at 7/29/2016 03:56:00 PM No comments:

With distribution in less than half the households that its cable news competitors enjoy, Al Jazeera America has a long way to go in the television ratings game. That fact was apparent during the new channel’s first week on the air, in which itsmajor programs appeared to hover in the 30-40,000 range, with only one show topping 50,000 viewers.
That honor went to former CNN host Ali Velshi, whose Thursday evening broadcast of Real Money with Ali Velshi drew the week’s best number with 54,000 total viewers. Other relative high points included the 2pm Saturday edition of News Live with 48,000 viewers and the Thursday 12:30pmInside Story with 41,000.
The debut of the channel’s prime time centerpiece America Tonight with host Joie Chen brought in just 34,000 viewers. And the 3pm launch hour Tuesday, which mainly served as an explanatory promo for the network, had only 22,000 viewers, below Nielsen’s minimum accuracy threshold.
Considering all of the channel’s obstacles, these numbers could certainly be worse, but they are of course dwarfed by the ratings from CNN, MSNBC and especially Fox News. Looking at Tuesday through Friday last week, in terms of prime time total viewers, Fox averaged 1.574 million viewers, MSNBC average 509,000 and CNN averaged 450,000.
Watch the first 5 minutes of Al Jazeera America’s launch below, in case you weren’t one of the 22,000 people watching it live:
Via: Mediaite.com
Continue Reading....
at 8/27/2013 03:30:00 PM No comments: 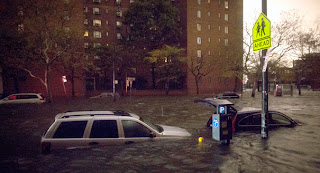 When President Barack Obama urged Americans under siege from Hurricane Sandy to stay inside and keep watch on ready.gov for the latest, he left out something pretty important — where to turn if the electricity goes out.
Despite the heightened expectation of widespread power and cable television failures, everyone from the president to local newscasters seem to expect the public to rely entirely on the Internet and their TVs for vital news and instructions.
(PHOTOS: Hurricane Sandy)

None of the major cable or local news channels put emergency phone numbers or key radio station frequencies on their screens. The only phone-related instructions on the homepage of ready.gov is how to get monthly disaster-prep text messages. The Federal Emergency Management Agency told the public via Twitter to use texts and social media outlets to stay informed.

TV and radio are still the primary methods of getting information about Hurricane Sandy to the public, but social media are increasingly important to those efforts, FEMA chief Craig Fugate said Monday.

“With these types of storms, you get a lot of this is going to be carried out through the traditional TV and radio media,” Fugate told reporters on a conference call. “But we’re using a lot more social media, we’re using everything from Facebook to Twitter. I think there’s a higher degree of awareness that people have of the storm is coming and what the impacts are going to be.”