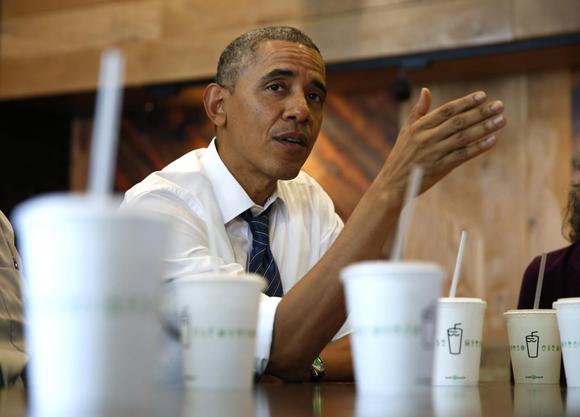 (Reuters) - President Barack Obama chastised his Republican opponents on Monday for focusing criticism on the events surrounding the deaths of four Americans in Benghazi, Libya, and on his signature healthcare law.
"The debate we're having now is about what, Benghazi? Obamacare? And it becomes this endless loop. It's not serious. It's not speaking to the real concerns that people have," Obama said.
He was speaking to more than 60 people at a fundraising dinner for Democratic candidates for the House of Representatives.
The event took place at a physician's home in the Washington suburb of Potomac, Maryland, as Obama seeks to persuade Democrats to organize for a voter turnout effort to prevent Republicans from ousting Democrats from control of the Senate and from building on their majority in the House.
Republicans in the House have begun a new investigation of the deaths of the U.S. ambassador to Libya, Christopher Stevens, and three other Americans during a militant attack on September 11, 2012.
The new probe was spawned by the disclosure of an email from Obama national security aide Ben Rhodes. Rhodes used the email to prepare Obama aide Susan Rice for television appearances, telling her to stress that the protests rocking the Muslim world at the time were not rooted "in a broader failure of policy."