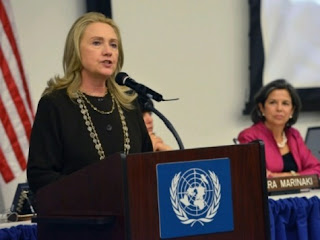 Two GOP Senators are demanding clarification on what security measures were in place for U.S. personnel there after reports that those who attacked the Libyan consulate may have had inside help.

Sens. Johnny Isakson (R-GA) and Bob Corker (R-TN) have sent a letter to Secretary of State Hillary Clinton which stated that they were "extremely concerned" over news of how security may have been handled in the days leading up to the attack.
Isakson and Corker have read reports that indicate the State Dept. not only failed to bolster security at the Libyan consulate as threats mounted but actually sought a waiver to circumvent their duty to so.
This squares perfectly with the scenario Libyan militia leader Fawzi Bukatef described when he claimed the Obama administration left all security measures in the hands of his militia, the February 17 Brigade. And it is feared that because of Bukatef's ties to the Muslim Brotherhood and other Islamist factions, the February 17 Brigade may have actually stood down and allowed the attackers to reach Ambassador Stevens.
Isakson and Corker are seeking clarity on these things. To that end, they have asked for "all communications" between the State Dept. and the U.S. consulate in Libya that dealt with security "in the period leading up to the attacks."
Via: Breitbart
Continue Reading...
at 9/27/2012 12:30:00 AM