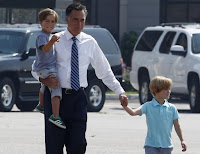 Even as he prepared to answer calls from within his own party to sharpen his message and ramp up his schedule of public rallies, beginning with a three-day bus tour through Ohio, Mitt Romney managed to insist that he was running a "very effective" campaign for President last night , adding that it was "doing a very good job".

One week after voters glimpsed the Republican challenger telling a private gathering of rich donors that 47 per cent of Americans are welfare-dependent "victims" he can't worry about, Mr Romney now finds himself under brutal pressure to return to the offensive against President Barack Obama and reverse a recent slide in public opinion polls, especially in battleground states including Ohio.

Yet, the candidate may have startled even his closest loyalists by professing in an interview with CBS's 60 Minutes last night that all remains well with his campaign. That has hardly been the verdict of some pundits even in the Republican camp like Peggy Noonan of the Wall Street Journal, who clarified at the weekend what she had said earlier last week about the 47 per cent debacle. "The Romney campaign has to get turned around. This week I called it incompetent, but only because I was being polite. I really meant 'rolling calamity'," she wrote.

But Mr Romney appeared to view things very differently. "I've got a very effective campaign. It's doing a very good job … It doesn't need a turnaround," he boldly told CBS. Referring to some recent national polls that show him and President Obama in a dead heat, he went on: "We've got a campaign which is tied with an incumbent President."