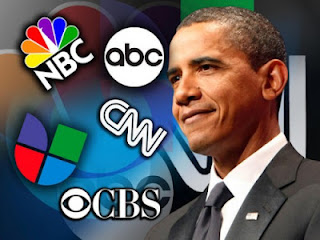 Over the years, I've generally had little patience when partisans make the "polls are wrong" argument. I've usually found it to be the last refuge of campaigns which were clearly struggling. Sure, individual polls can be wrong, and some can occasionally produce a crazy outlier, but a collective average of polling produces a roughly accurate snapshot of the state of a race. This year, however, is different. The overwhelming majority of media polling this election employ such absurd assumptions about turnout this November that they not only misrepresent the presidential race, they are actively distorting it. I also believe it is intentional.

In 2008, the electorate that elected Barack Obama was 39% Democrat, 32% GOP and 29% Independent. This is what we call a D+7 electorate. Obama defeated McCain by 7 points, the same margin. In 2004, the electorate was 37% Democrat, 37% Republican, and 26% Independent, in other words D/R +0. Bush defeated John Kerry by 3 points nationally.
Yet, virtually every big media poll is based on a model in which Democrats equal or increase their share of the electorate over 2008. Beyond simple common sense, there are many reasons this won't happen. The Dem vote in '08 was the largest in decades. It came after fatigue of eight years of GOP control, two unpopular wars, a charming Democrat candidate who was the Chauncy Gardner of politics, a vessel who could hold everyone's personal dreams and hopes for a politician. It was a perfect storm for Democrats.
None of the factors driving Democrat turnout in '08 exist today. Recent polls from AP, Politico and the daily tracking polls from Rasmussen and Gallup, all of which assume relatively lower Democrat turnout in November, show the race essentially tied. Only those polls showing an electorate with equal or greater numbers of Democrats show Obama with any sizable lead.
Yet, it's these polls that are driving the political narrative. Every day the media launches a number of stories about Romney's "struggling" campaign. They cite anonymous GOP sources who wring their hands that the campaign is losing ground. The only real evidence of this, however, are the polls which heavily over-sample Democrat voters. Without these skewed polls, the media's narrative would be untenable.
Via: Breitbart
Continue Reading...
at 9/25/2012 07:00:00 PM