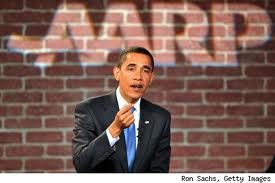 A politician spoke to a top D.C. special interest group on Monday. He told them that his legislation helped make them richer at taxpayers' expense and received their applause for doing so. Sound outrageous? Well, consider this: The speaker was President Obama, and the special interest was AARP.
The president spoke to the senior group's annual conference via satellite to tout his health care law, arguing that it had strengthened health care for seniors. He also warned that a Mitt Romney presidency would do the bidding of the insurance giants.
"No American should ever spend their golden years at the mercy of insurance companies," Obama said.
What he didn't say was that the leadership of AARP had worked extensively behind the scenes with the White House to pass the law, acting against the wishes of its own members and spinning furiously to keep its own board of directors "in line."
Advocacy is only part of what AARP does. It is also heavily involved in the insurance business. Insurers pay AARP to use its name, and that accounts for 60 percent of the organization's revenue. Membership dues account for just 17 percent.
Thanks to its cuts to Medicare Advantage, Obamacare is expected to expand the number of seniors buying "medigap" supplemental insurance plans. AARP controls 34 percent of the market for such plans. According to a 2011 House Ways and Means Committee report, AARP stands to make between $55 million and $166 million from Obamacare in 2014 alone.
As emails recently unearthed by the House Energy and Commerce Committee show, the supposedly neutral, nonpartisan group coordinated with the White House on media strategy and lobbying reluctant lawmakers.
Via: Washington Examiner
Continue Reading...
at 9/23/2012 12:30:00 PM