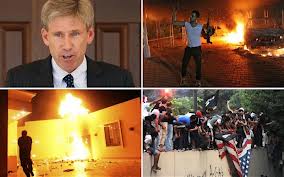 It should come as no surprise that the State Department has much to answer for in the abysmal manner in which it so disastrously allowed the horrific murder of the American Ambassador, Chris Stevens, and three other Americans by Muslims in Benghazi, Libya to occur. What took place was an act of barbarism deliberately planned and perpetrated on the very anniversary of the 9/11 atrocity by fellow Muslims against Americans upon American soil.

And who must bear full responsibility for not adequately protecting the hapless ambassador and his staff in Benghazi? Well, it has to be none other than Hillary Clinton, Secretary of State, and appeaser to all and every tyrant and international thug in the world.

Her craven apologies to the ever hate filled and murderous Muslim world by blaming an amateurish video, purportedly the excuse for mass Islamic violence and killings, has been enough to make Neville Chamberlain look decidedly heroic and resolute. But then she takes her queue from her boss, the Appeaser and Apologist in Chief; Barack Hussein Obama.

We now know that the killings, using RPGs and incendiary devices, were a premeditated and well planned operation by Al Qaeda. Even the Libyan president has said so, yet Hillary Clinton and President Obama continue to falsely attribute the Arab bloodlust to the video. And the Secretary of State, a week before the atrocity took place, stated that the security measures in place at the Benghazi mission were “robust.”