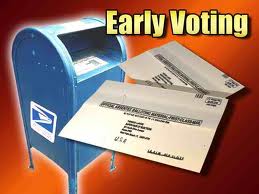 DES MOINES – As eight bells rang from the clock tower of the Polk County Courthouse, the doors to the election office opened on Thursday morning and voters began casting the first ballots of the presidential race in this battleground state.
“It seems like we’ve been waiting for this day for a long time,” said Nancy Bobo, 60, who stood in line and voted for President Obama. “I’m just thrilled to get out here and vote as soon as I possibly could.”
Less than a week before the president’s first debate with Mitt Romney and a month before the closing arguments of a campaign traditionally would be made, a steady stream of voters walked into election offices across the state to cast their ballots. They will be joined by voters in Ohio next week, along with 30 states where some type of voting is already under way.
For millions of Americans, the election no longer is a fixed date on the November calendar. It is increasingly becoming an item on the fall checklist, a civic duty steeped in the convenience of everyday life. The development is profoundly influencing presidential races, with Election Day becoming Election Month for as much as 40 percent of the electorate this year.
The number of people casting early ballots nationally climbed to 31 percent in 2008 from 23 percent in 2004, according to Michael McDonald, who studies early voting at George Mason University. This year, party strategists estimate that up to 40 percent of voters will cast ballots before Nov. 6, but the proportion is even higher in many battleground states. 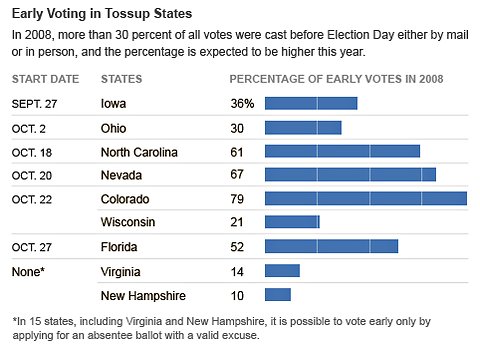