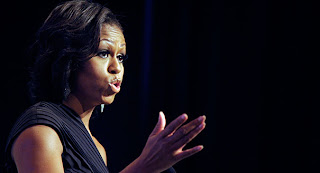 First lady Michelle Obama likened citizens flexing the right to vote to the marches, sit-ins and struggles of the civil rights movement in a speech before the Congressional Black Caucus.
"We cannot let anyone discourage us from casting our ballots.  We cannot let anyone make us feel unwelcome in the voting booth.  It is up to us to make sure that in every election, every voice is heard and every vote is counted," Obama said in Saturday remarks.
Recalling the struggles of the civil rights movement, Obama said that it was imperative for ordinary citizens to flex their right to vote.
"This is the march of our time -- marching door to door, registering people to vote.  Marching everyone you know to the polls every single election," the first lady said. "This is the sit-in of our day -- sitting in a phone bank, sitting in your living room, calling everyone you know — your friends, your neighbors, that nephew you haven’t seen in a while, that classmate you haven’t spoken to in years —making sure they all know how to register, where to vote -- every year, in every election."
"This is the movement of our era -- protecting that fundamental right not just for this election, but for the next generation and generations to come," Obama said. "Because in the end, it’s not just about who wins, or who loses, or who we vote for on Election Day. It’s about who we are as Americans. It’s about the democracy we want to leave for our kids and grandkids."
"It’s about doing everything we can to carry on the legacy that is our inheritance not just as African Americans, but as Americans -- as citizens of the greatest country on Earth," Obama said.
Obama also bemoaned the level of apathy in the the country at large.
"How many of us have asked someone whether they’re going to vote, and they say, no, I’m too busy -- and besides, I voted last time; or, nah, it’s not like my vote is going to make a difference? See, after so many folks sacrificed so much so that we could make our voices heard, too many of us still choose not to participate," she said.
Via: Politico
Continue Reading...
at 9/23/2012 12:06:00 PM